How do different plastic pipes behave in sunlight?

CPVC plastic pipes are your best bet when installing water pipes for internal and external (exposed to sunlight) household applications.

When buying plastic water pipes for your dream home or replacing the old damaged GI pipes, you are thinking about durability and a long-term solution.

Have you ever given a thought to how the Sun affects pipe durability especially in external usage? Sun exposure could weaken the piping material and disintegrate it. Weakening of the walls can cause leakages and even failures. Thus, it is important to understand if the water pipes can withstand the Sun, for years to come.

Before understanding materials of plastic water pipes let's understand about the Sun. Sun’s solar energy that hits the Earth’s surface has three components - 1) visible light, 2) infrared radiation and 3) ultraviolet (UV) rays. We all know visible light. Infrared radiation is the reason we feel warm / hot, while in the sun. UV light is the short-wavelength light that is not visible to the human eye. It is this UV light that is the main concern and can degrade water pipes. But why is this invisible UV light such a big deal?

UV light is a powerful catalyst

UV light activates the process of photo-oxidation. Photo-oxidation is the degradation of a polymer surface in the presence of oxygen or ozone. Thus UV light acts as a catalyst/facilitator for these reactions.

This process is the most significant factor in weathering of polymers. Photo-oxidation is a chemical change that reduces the polymer’s molecular weight by attacking the hydrogen and carbon chain thus degrading the material. The two logical ways to overcome degradation are

With this crash course in chemistry, we can look at how UV light specifically affects plastic water pipes made from PPR, PEX and CPVC.

Not all plastic pipes degrade

Plastic water pipes are affected by UV due to their vulnerability of the polymer chain (hydrogen-carbon chain) due to photo-oxidation. So all the polymers/plastics shall degrade, however degradation would vary from material to material. So let’s look at a few plastic materials which are used for water pipes like PPR, PEX and CPVC.

Polypropylene Random Copolymer (PPR) pipes are fusion welded pipes and require special workmanship and tools. This leads to issues in installation. Further, please see the molecular structure of PPR below.

UV light facilitates the photo oxidation process due to its easy access to the hydrogen and carbon chain. This leads to degradation of PPR pipes when exposed to sunlight.

PPR also tends to be more translucent, meaning the UV is able to attack not only the outside surface of the pipe, but also creates free radicals and molecular damage within the pipe wall. Prolonged sunlight exposure leads the PPR polymer chain to weaken leading to weakening of the pipe wall and disintegration of the pipes.

Most of the PPR pipe manufacturers recommended a UV protection layer over the pipes used in Sunlight exposure. This means you need to use different pipes for internal and external applications. This would add complexity of handling different pipes and add on to the cost. 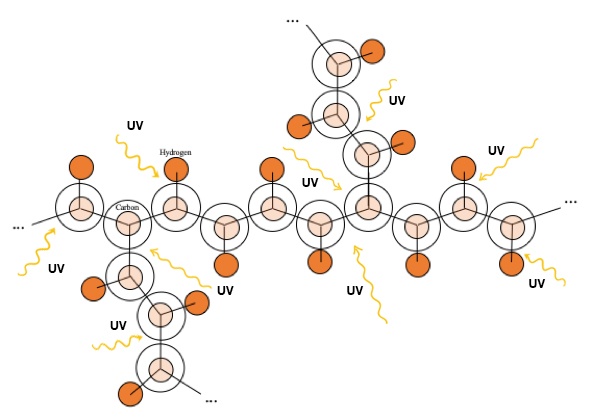 PEX polymer chains are also prone to degradation due to photo-oxidation facilitated by the UV light. Prolonged sunlight exposure facilitates the photo radiation process reducing the impact strength and weakens the pipe walls, leading to leakages.

Besides UV light, chlorine used as a disinfectant in water gets aggressive in elevated water temperatures weakening the insides of the pipes and degrading the pipes for leakages. Early warning signs of chlorine induced degradation in PEX piping that has been in service can be observed in the “popcorning” of the pipe surface. 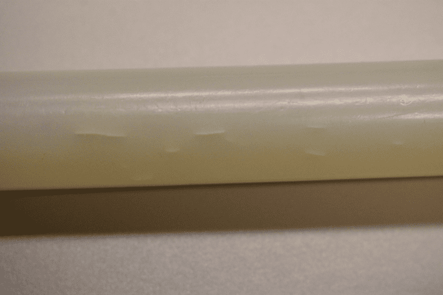 With PEX, there are other issues as well.

There have been instances where water from PEX pipes was found to have issues with taste and odour.  The University of Minnesota’s Institute on the Environment, Ensia has also documented these observations. UV light could lead to increase in such instances. Most of the PEX manufacturers offer different colored pipes for different applications  ( Blue for Cold water, Red for Hot water piping and white/grey for external applications). This adds to complexity in ordering, handling and installation.

Compared to the polymers PPR and PEX; there is relatively less hydrogen in CPVC (chlorinated poly vinyl chloride). More than 60% of the hydrogen has been replaced with chlorine - a halogen.

CPVC generally has 63-67% of chlorine in its polymer chain. Due to reduced hydrogen in the polymer chain photo-oxidation does not occur and hence the level of degradation is negligible. Further the Chlorine (a bigger atom than Hydrogen acts as an umbrella and prevents the UV light from penetrating and attacking the polymer chain.

This improves the durability of CPVC pipes. That does not mean that there is no effect from UV.

CPVC plastic pipes are made from CPVC  compounds which are made up of CPVC resin with a few  additives. Some of the additives used get affected when exposed to sunlight for prolonged periods. One of the effects of UV Light on the CPVC pipes is discoloration of the pipe surface and the second is slight reduction in impact strength of the pipes.

It is interesting to note that there is no change in the pressure bearing capabilities of the CPVC plastic plumbing pipes.

The reduction of impact strength is really not a great issue post installation as once the pipes are installed there are very slim chances for damages of the pipe due to impact on the pipes.

The Mechanical Engineering Department at the King Fahd University of Petroleum and Minerals in the Kingdom of Saudi Arabia conducted a study testing samples of locally manufactured CPVC pipes in harsh weather conditions. The Sun shines strongly throughout the year in this region. After exposure for periods up to nine months, the results showed UV weathering had limited effects on the strength of the material. The only change was discoloration as described above. Incase of CPVC it is recommended to paint the pipe with a water based latex/polymer paint to avoid discoloration being visible. CPVC plastic pipes installations  are successfully running  for over 50 years in Southern California USA,  30+ years in Middle east and 20+ years in India in external application and withstand the harsh weather conditions and sunlight of these regions without any reported failures. Further CPVC being an inert material is unaffected by the chlorine (used as a disinfectant) in potable water.

From the above we can confidently conclude that CPVC plastic water pipes are your best bet when installing water pipes. The same  pipe can be used for hot and cold water, internal and external (exposed to sunlight) application. CPVC pipes have been installed for over 20 years in India and this is good enough proof as those buildings have not reported any issues till date.

Further, the other benefits are easy installation, availability , world wide approvals in potable water use plus value for money makes CPVC the most ideal product for water supply pipe.

There are many CPVC manufacturers in the country, so choosing the right CPVC is furthermore important as all CPVC pipes may not deliver the above.

FlowGuard® Plus is a registered brand name of Lubrizol and is licensed to manufacturers around the world. In India, Ashirvad Pipes Pvt Limited and Prince CPVC Pipes & fittings Limited manufacture and sell it through their vast retail channel all over the country.

Use CPVC House Piping systems ask for FlowGuard® Plus….