Delivering safe and clean water to millions of Indians since 1999.

A clean, secure water supply is one of the basic requirements for a healthy house. It’s such a basic resource, in fact, that it’s easy to overlook how much we depend on it.

To live a healthy life, each person needs between 20 and 50 litres of clean water every day to drink, bathe, brush and to meet other necessary needs. Clean, healthy water is important not only for hydration, but also for sanitation and disease prevention.

Here’s a video in which the FlowGuard® Plus team has tried to capture the true essence behind the plumbing needs of all households in India:

Many days at home are likely to begin with the following routine: wake up, switch on the water, wash, go to the kitchen, turn on the tap, clean and prepare food, and then go on, prepared for the day ahead. But do we notice what’s actually there when we do simple household tasks like running the cold tap? Is your water source as clear as it appears?

Water must first travel through a network of pipes in your home’s plumbing system before reaching your shower or kitchen. This system is essential for bringing this valuable resource into your home in a timely and secure manner. High-density polyethylene (HDPE), polyvinyl chloride (PVC) or chlorinated polyvinyl chloride (CPVC) are the most common materials used in the construction of water distribution systems.

These plastic plumbing pipes that have become copper substitutes are popping up in more and more homes, but does it make a difference in terms of taste? Water should be clean and neutral as it enters our house. This isn’t always the case, however. 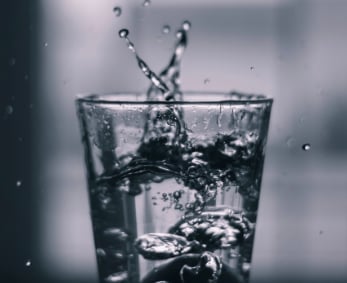 This migration of substances occurs in the water distribution system; it all takes place in the plumbing. The durable, long-lasting plastic piping that distributes water in most residences is all susceptible to some element of degradation and migration.

It is important to know what’s taking place inside the system, to know the risks associated with the chemical reaction that begins as soon as the hot and cold tap is turned on at home. To know what’s happening inside our water, we need to know what’s going on inside the pipe.

A look inside your pipes 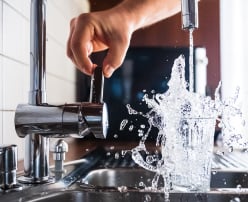 At the very beginning of your water’s life cycle, it undergoes various filtration and decontamination treatments at a water plant. This is where water sourced naturally becomes safe to use. However, on its journey through the plumbing system to the kitchen or bathroom, bacterial buildup can occur along the surface of the plastic pipe along the way. Microbial Water Contamination is made possible because of Biofilm. 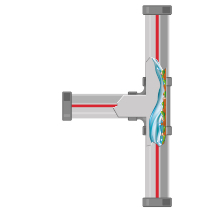 Biofilm is formed over time on surfaces in wet environments, such as pipes used to transfer liquid. It adheres to the inner surface of the pipe, forming a slimy, glue-like substance where bacteria can form and grow. Gradually, biofilm becomes capable of releasing microorganisms and bacteria into the water. This release of bacteria can not only alter the quality of water, but it can also lead to a number of known illnesses.

Legionella is a waterborne disease that thrives in warm wet environments of 32° to 42°C, making plumbing systems the ideal location for growth. It can be transferred to the human body in mist form, such as the shower head. Infection can cause illnesses such as mild influenza or even pneumonia.

Water that has been contaminated by Pseudomonas can lead to lung infections and in some cases, severe infections of the blood. This is a particular risk to residents with weakened immune systems.

Coliform bacteria, of which E-coli is a member, is known to grow through biofilm in water and can lead to mild or extreme gastrointestinal illnesses. Coliform bacteria is a naturally occurring growth in the intestines of humans, however it can become a dangerous pathogen if found in water.

While it’s easy to assume the pipe surface is as smooth on the inside as the outside and therefore incapable of accommodating unwelcome microbial residents, there are chemical reactions at work which are altering the pipe’s surface, allowing bacteria to adhere more easily, encouraging biofilm to build a home within your home. To understand the source of this process, we return to the water treatment plant.

From Plants to Pipes: Why is Contamination Happening? 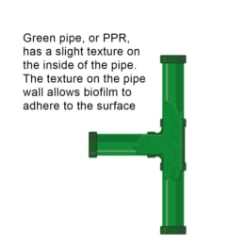 To eliminate naturally occurring bacterial presences in water sourced from the reservoir, treatment plants utilize chlorine and chlorine dioxide to kill the bacteria and make water safe to be distributed to homes. The addition of chlorine to the water produces hypochlorous acid, which can have a corrosive effect on many internal pipe surfaces. This creates small gouges along the surface of the pipe, developing a suitable platform for microbial growth. 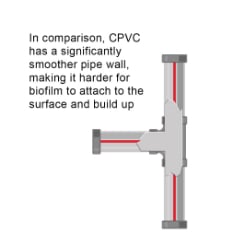 Pipe smoothness is therefore essential to long-term biofilm prevention. However, the presence of chlorine in treated water is inevitable, necessary and not without its effects on the internal structure of your plumbing at home. So how can we prevent the threat of biofilm in the family home, without building a treatment plant on every driveway? The answer is in the pipes’ biofilm resistance.

Any water distribution system is prone to the formation of biofilms that promotes the growth of harmful bacteria. It depends on the piping material and is often system specific.

Drinking water contains ammonia. In nitrification, ammonia is oxidized into nitrite and nitrate, which bring down the effect of residual disinfectants in water.

This hampers the water flow & results in the presence of dissolved matter in the water. Water may appear poor in color.

Leaching is the process of migration of chemicals from the pipe into the water. Pipes, fittings and jointing material can leach and contaminate water quality.

Is CPVC better than steel and other non metallic pipes?

With a clearer picture of what enters your home when you turn on the cold tap for your first drink in the morning, you can now understand that homeowners need one last line of defence in the prevention of corrosion, biofilm buildup and microbial contamination. The solution doesn’t require chemicals, additives or apparatus; it’s in the plumbing system itself.

The long term benefits of a clean, safe water supply require long term resistance to chlorine corrosion and biofilm formation. The smoothest pipe, made from the most resistant materials, installed in the most efficient way. What does this material look like?

In an assessment conducted by Kiwa Water Research, microbial growth potential was tested on multiple materials which are built to accommodate water intended for human consumption. These materials are used today in plumbing systems in homes around the world. They include Polypropylene, known as green pipe (PPR), chlorinated polyvinyl chloride (CPVC), stainless steel and copper. These materials were in contact with clean water and the buildup of biofilm on the surface of each pipe was monitored and assessed. The development of Legionella bacteria in the water was also tested, and there was one clear winner.

FlowGuard® Plus CPVC has been at the forefront of providing safe drinking water solutions in India since the last century. Not just homeowners, but stakeholders across the entire spectrum - builders, plumbing contractors, consultants and plumbers - have had a healthy choice for cost-effective and easy-to-install CPVC pipes and fittings.

Flowguard® Plus CPVC compound is routinely tested to the highest standards for water quality, and is compatible with chlorine-based water disinfection. It also complies with NSF / ANSI 61 under all potable water conditions. It also outperforms all other house piping systems available or in knowledge, in the areas of water quality impacts, biofilm growth potential, and chemical permeation.

A big cheers to your next glass of water!