FlowGuard® Plus CPVC vs. Other Plastics

“Plastics” are often lumped into a single category when comparing plumbing systems. The truth is that years of research, testing, and real-world application show clear differences in these plastics.

FlowGuard® CPVC pipes and fittings have been in use for 60 years. The material has proven itself as a reliable plumbing product for all types of plumbing applications, including residential homes, high-rise apartments, commercial buildings and government buildings. The material meets all relevant requirements and standards for plumbing systems and regularly passes independent inspections by third-party testing organizations.

Other plastic water pipes simply cannot compare to the reliable history and ongoing performance of FlowGuard Plus Pipe and Fittings.

So, even if the CPVC pipe price might be higher compared to other plastics, it is certainly more cost-effective holistically.

There are some major differences between UPVC, CPVC, and Other materials. Let's explore them.

FlowGuard Plus pipes and fittings have several benefits over polypropylene (PP), including superior resistance to chlorine and simpler installation.

When it comes to hot water, PP is not rated to handle water at as high of a pressure as FlowGuard Plus CPVC pipes. When used for hot water applications, PP installers must use fiberglass reinforcement and a thicker pipe wall, which reduces the flow and available fixture units. And PP also has higher thermal conductivity, increasing energy consumption and costs as heat leaves the system.

When it comes to erosion, PP is susceptible to hot chlorinated water, and pieces of material can flake off, clogging fixtures and appliances. In fact, many water heaters were repaired in the late 1990s due to PP failures.

Polybutylene used to be the standard for plumbing systems. But due to growing research and poor field performance, it is no longer permitted in many places around the world, including new constructions in North America.

The product was found to react with low levels of chlorine in drinking water, leading to reduced tensile strength and premature failure. For countless homes around the world, FlowGuard Plus CPVC plumbing systems have served as a replacement for polybutylene.

If your home or building still has polybutylene piping, avoid the risk of damaged caused by a chlorine failure and contact a specialist today with extensive experience with retrofits.

In the past 20 years alone, PEX systems have been included in several plumbing failure class action lawsuits and have had to be reinvented in response. The service history of FlowGuard Plus CPVC piping systems, however, is unparalleled. It has been used reliability for hot and cold water distribution piping systems for nearly 60 years.

Water quality is another clear advantage for CPVC. Tests have found that PEX is more prone to biofilm formation potential and is also more prone to Legionella bacteria growth.

Additionally, PEX has been known to leach gasoline components, such as MTBE, ETBE, TBA and Toluene into water supply. The material is also more permeable than CPVC, as evidenced by this image of ink permeating through a PEX pipe after less than 10 years of service. 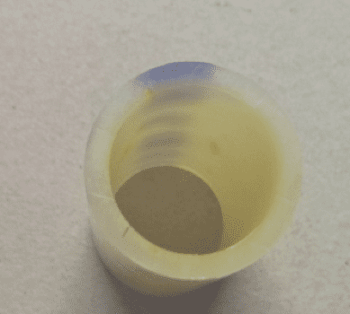 The ink from the print line on this PEX pipe has permeated almost completely through the pipe after less than 10 years.

In 2017, a technical note issued by the Plastic Pipe Institute® (PPI) stated that elevated temperatures, pressures and UV rays can significantly reduce the service life of PEX. And when chlorine is involved, leaks and failures are even more likely.

Once again, thanks to its superior quality, CPVC outdoes PEX in terms of installation costs. Third party research conducted by Home Innovation Research Labs found that CPVC installs 15% faster than PEX. Related, the solvent cemented joints of CPVC often become the strongest point in the system, while PEX joints are a likely area for concern.

Much like polybutylene and PEX, PE-RT piping manufacturers point to its 20+ year history of use in European plumbing systems, without regard for the unique disinfection procedures and water chemistries found in other parts of the world that have damaged European products outside of the region in the past.

Due to the newness of PE-RT, information is not available about the long-term performance of PE-RT plumbing systems. However, the chemistry of PE-RT suggests that it will be subject to the same limitations as PEX with regard to chlorine induced failures, biofilm formation potential, permeation and UV resistance.

Ready to Get Started?

Contact us for a free process suitability and technical consultation. We want to make sure you get the localized support and information you need to take your project from blueprint to completion.