Understanding UPVC & CPVC pipes for Potable water use In Buildings

Understand the difference between CPVC vs UPVC and learn what makes CPVC better for residential, commercial, and government projects.

PVC is a very versatile matter and finds use in piping, external casing for wire & cables, tubing for drug delivery, medical & food packaging.

PVC or UPVC (Polyvinyl Chloride) & UPVC (Unplasticized  Polyvinyl Chloride) are synonyms. PVC by nature is a rigid material and plasticizer are used for making it soft. In this article, we would focus on understanding the difference between UPVC and CPVC.

PVC pipes and fittings are made with PVC resin added with additives to make it workable for manufacturing pipes and fittings.  Piping manufacturers have been using lead as a processing aid as it is very cheap compared to other additives.  World over lead has been banned for use of processing aid for PVC piping in potable water use as lead leaches out from pipes and creates health issues due to poising of potable water.

Broadly PVC pipes can be used for potable water supply & Drainage. Let’s look at a few Indian standards recommending the use of PVC pipes for various application:

PVC pipes have excellent properties as below:

The limitation of PVC pipes are as follows:

As we get deeper into understanding the differences between UPVC and CPVC, it is imperative to look at the limitations UPVC has in comparison to CPVC.

In 1950, when PVC became popular, a need arose to overcome the limitation of PVC as the advantages were numerous. This is when after 9-10 years of R & D CPVC was invented in 1960:
So, let’s see what CPVC is and how it is better than PVC for Hot & Cold potable water house piping and commercial piping systems.

Generally, PVC has 56-57% Chlorine whereas post chlorination of PVC the chlorine content increases and CPVC has 63-67% of Chlorine on its hydrocarbon chain. This introduction of Chlorine makes the polymer a very stable polymer and provides higher temperature stability. This also reduces the oxidization potential of the polymer which is the main reason for the degradation of polymers on exposure to UV radiation, heat, oxygen.
Further CPVC is lead-free which makes it safe for potable water use across the world.

CPVC pipes & fittings are approved for potable water use by USA national Model Codes, NSF International, DVGW (Germany), WRAS (UK), CSTB (France), KIWA (The Netherlands), TSE (Turkey) & CSA (Canada). The Bureau of Indian Standards BIS: 15778 CPVC Pipes for Potable Hot & cold water distribution.
The above approvals are based on extraction studies that have verified that ingredients such as heat stabilizers do not migrate from CPVC at levels that would be unsafe. 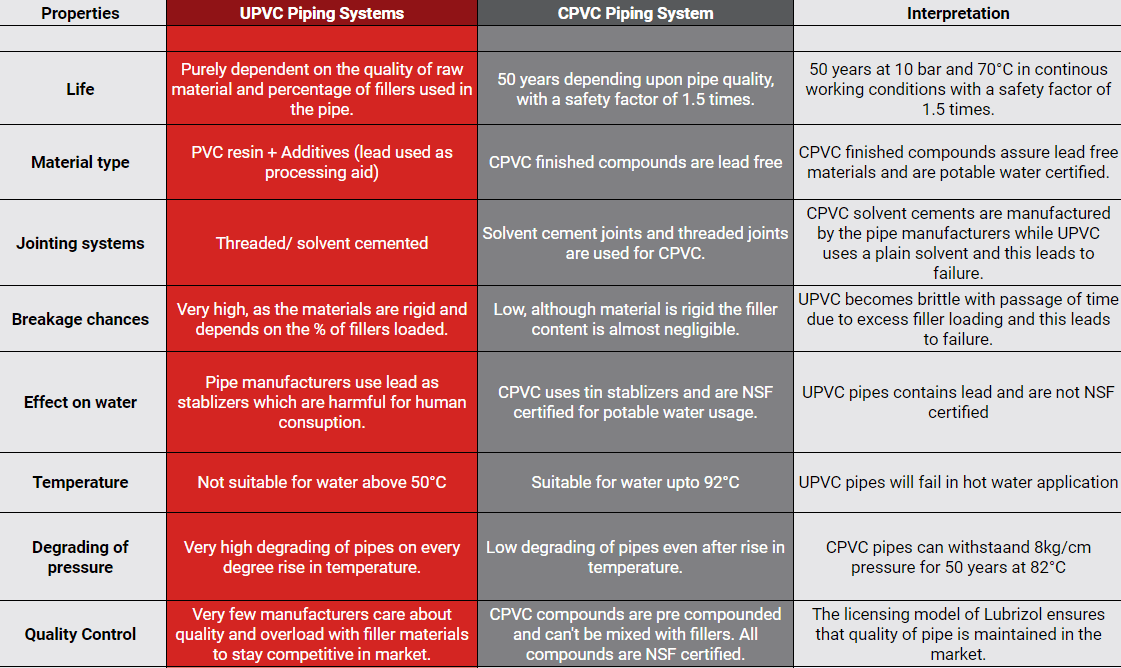 When it comes to understanding the differences between UPVC and CPVC, With this article you would be now clear that CPVC is a higher grade / upgraded version of PVC, as it uses all the advantages of PVC and overcomes all the limitations which can be summaries as follows:

NOTE: For drainage applications, if there's a choice between UPVC vs CPVC, PVC/ UPVC pipes are preferred over CPVC.

Make an informed choice as homes are not built daily and by using the right material you would have trouble-free plumbing for years to come.

Why trust  FlowGuard® Plus by Lubrizol for CPVC Pipes in India?

Use CPVC Piping systems ask for FlowGuard® Plus….