How to Account for Pipe Expansion in a Plumbing System

Thermal expansion and contraction is a property of all piping materials. As the water and environmental temperature increases or decreases, the pipe length will fluctuate. The longer the run, the more significant the change.

In plumbing systems, if this expansion and contraction is not accounted for during system design, it can lead to compressive stress on the pipe and fittings. Over time, this stress may weaken the pipe, resulting in leaks and premature pipe repairs.

Fortunately, thermal expansion and contraction can be easily prevented with deflection mechanisms.

CPVC piping is flexible, which means up to a certain point that it can safely bend without sustaining any damage. Deflection mechanisms take advantage of this flexibility and allow the pipe to move within the system while limiting the stress placed on the material.

How to Deflect Thermal Expansion

Temperature differential is the range a pipe will be exposed to. In other words, the difference between the coldest and hottest the pipe will be from time of installation through its service life. If the temperature change is more than -1°C, a plumbing system should include deflection configurations.

Depending on the space around the piping system, there are four mechanisms to deflect expansion stress:

Piping expansion loops are the preferred choice for most plumbers. As the incoming pipe length changes, the opening of the “U” narrows or widens as needed. The two sides of the “U”are flexible enough to allow for this movement. The length of the sides is determined by how long the pipe run is.

In the animation above, L represents the total length of the loop, with 2/5L representing each vertical portion, and 1/5L representing the horizontal cross section where the restraint is placed.

Expansion offsets are used when the pipe must avoid fixed structures. As the pipe expands, the top and bottom elbows will push in, causing the vertical length to angle to the right. With contraction, the vertical pipe angles to the left.

All piping systems naturally include changes in direction, which can also be used as deflection mechanisms. At the end of the long run of pipe, the corner elbow and the adjoining pipe allow for some degree of movement. 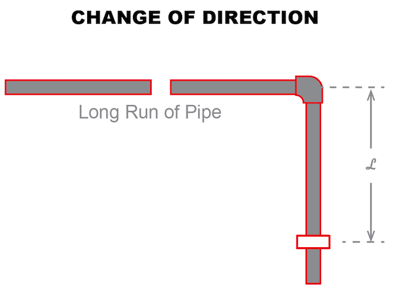 Using the image above, L represents the distance from the elbow to the hanger or guide.

This mechanism is often used in tight, enclosed areas where it is difficult to include an expansion loop or offset. Acting as a shock absorber, expansion joints allow the pipe to move freely within another pipe, while maintaining the necessary seal. However, it is a more expensive option and often used as a last resort.

It is important to follow best practices when allowing for thermal expansion and contraction including:

The Flowguard® CPVC Pipe Expansion Calculator is a free tool to help plumbers calculate the linear expansion of the pipe and obtain the required dimensions for an expansion loop. Click below to access the calculator.

For questions or to learn more about FlowGuard Pipe and Fittings, contact one of our piping systems consultants.