CPVC and the Importance of Surface Smoothness in Piping

Plumbing specialists in the Kingdom of Saudi Arabia must balance numerous variables in ensuring they provide a superior system of pipes and fixtures that distribute water for use in a building. As part of that analysis, the merits of smooth interior pipe surfaces should not be downplayed in promoting the delivery of drinking water that is safe. Surface smoothness is in fact a primary factor in preventing biofilm formation and should represent one critical aspect when choosing a piping material for your home.

Biofilm forms when bacteria adhere to surfaces in an aqueous environment and begin to excrete a slimy, glue-like substance. In the case of plumbing pipe, the right conditions for biofilm formation include a temperature range of the water of between 32°-42° C combined with surface roughness that ease the bacteria attachment along the pipe walls. Attachment is followed by a period of growth: the microbes and bacteria stick together at an accelerated pace and colonize there, forming a bulbous, complex structure.

While conventional chlorination of water controls many forms of bacteria, its effect on microbial growth that colonizes on piping surfaces is minimal. Besides this, once added into water, chlorine transforms into a hypochlorous acid with highly corrosive effects. In turn, this generates a vicious cycle of corrosion creating small gouges along the surface of the pipe, leading to even more bacterial activity.

When biofilm builds up, as it can in piping systems that do not have the smooth walls of CPVC and are easily corroded by chlorine, it provides an ideal breeding ground for such bacteria as Legionella, Pseudomonas and coliform bacteria such as Escherichia coli. This carries (1) the potential for generally poor water quality, but most dangerous, (2) risks of waterborne illness and disease that can arise from these bacteria.

The World Health Organization (WHO) report, “Health Aspects of Plumbing,” section 3.1.4: Microbial growth in plumbing, states: heterotrophs, Legionella and Pseudomonas gives a more detailed understanding of the mechanisms of microbial growth behavior that all plumbing professionals need to understand as part of their practice.

Legionella, one of the most frequent causes of waterborne disease, grows best in warm water (32°-42° C, as noted above) tanks and plumbing systems. It is transmitted to humans in mist or aerosol form such as via shower heads. Illness can follow in the form of either a mild influenza-like respiratory condition called Pontiac fever or, far more severely, as Legionnaires' disease, where the bacterial infection leads to pneumonia. While this lung disease can be treated with antibiotics, in 10-15% of the cases, it is fatal.

Pseudomonas infections usually occur in hospitalized people or those with weakened immune systems. Infections of the blood, pneumonia and infections following surgery can lead to severe illness and death. Healthy people can also develop mild illnesses with Pseudomonas aeruginosa after contact with water contaminated with it. Ear infections, especially in children, and more generalized skin rashes may occur after exposure to inadequately chlorinated hot tubs or swimming pools.

Another risk is increased counts of total coliform bacteria, the class of bacteria of which E. coli is a member. A natural component of the intestines of humans and warm-blooded animals, these bacteria become pathogens when found in drinking water, indicating recent fecal contamination that can cause either mild or extremely acute and dangerous gastrointestinal illness.

For instance, a controlled study conducted by Kiwa, the respected global testing and inspection institute in The Netherlands, found that several times more legionella developed in PEX and PPR piping when compared to CPVC over the same time period. 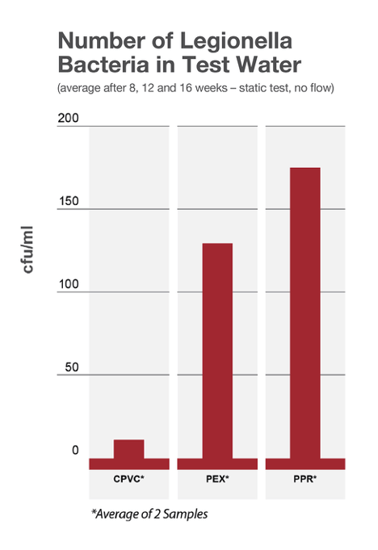 Not surprisingly, FlowGuard® CPVC is approved for potable water applications by, in addition to Kiwa, NSF and WRAS. Get all the detail on this critical issue from our infographic, How CPVC Better Resists Biofilm Formation Than Other Piping Materials. In it you’ll find out more about: